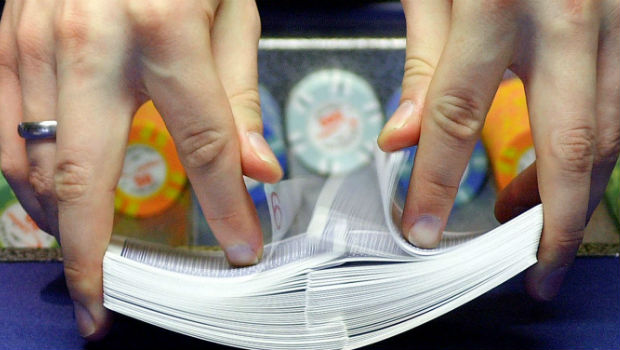 The shuffle is an integral part of poker but one that eludes so many card players. Often times players ask themselves, “Why don’t I know how to shuffle like that?” Most of the time the answer is pretty simple: because you’ve never been taught the right way.

No card player wants to admit they don’t know how to shuffle correctly when it becomes their turn to deal. Fortunately, you’ve come to the right place to learn how to shuffle cards like a pro. If you follow the advice of our experts at TopPACasinos.com and practice proper shuffling technique, you will know how to do a perfect shuffle six different ways.

What’s The Point of Shuffling Cards?

The purpose of card shuffling is to randomize the order of the deck. Poker and blackjack are games of skill and chance. In online games, a random number generator ensures the next card is indeed random. In brick-and-mortar casinos, live-dealer games and poker rooms, it’s the shuffle.

Of course, we’re talking about a single standard deck when it comes to human shuffling. When dealing with multiple decks, casinos use shuffling machines. Card shuffling ensures randomness in the order of the cards, reducing the chances of players – and the house – cheating.

According to a study done in 1990 by mathematicians at Columbia University and Harvard University, seven is the ideal number of times to shuffle a standard deck of cards in order to truly randomize the order. Shuffle fewer than that and it’s not fully mixed; shuffle more and you’re just wasting time.

An intermediate-level shuffle, the riffle is one of the most common techniques when it comes to shuffling cards.

Pro tip: Focus on the riffle first. Getting the cards to fall in an alternating pattern takes practice, so just work on that first. Don’t just cut the cards in half – actively riffle them from one hand to the other. That will give you the feel of what it’s like when you’re doing the hands simultaneously and you’ll learn the proper amount of pressure to apply and release.

Once that becomes consistent, then focus on the bridge and releasing pressure from your palms to let them cascade.

A beginner shuffle with a similar concept to the riffle, this ends in the cards riffling together but the hand positioning is different and it takes place on a table.

Pro tip: If the cards aren’t angled enough, it’s common for them to not mix into one another, but instead fall adjacent to each other. Don’t be afraid to start this shuffle with a 45-degree angle between the two decks to make sure they mix. As you get more experienced, you can start doing it with the cards closer to parallel.

This is the first shuffle we’re looking at where the deck of cards aren’t parallel to the table, but instead start perpendicular. For most people, this beginner shuffle is the easiest to perform. It will gradually mix the cards while transferring them from the left hand to the right.

Pro tip: If you’re not the one performing this shuffle, make sure to watch closely – it is the most common way to perform sleight of hand by magicians or cheaters. This is most frequently done by holding a desired card either on the top of the deck or the bottom and holding onto it the whole time to make sure it ends up in a certain spot (whatever would benefit the attempted cheater).

You’ve likely done a variation of this advanced shuffle without even knowing you’ve done it, but the Weave Shuffle has a bit of a twist at the end.

Pro tip: Try this one by yourself, first. Performing the bridge with one hand can be tricky and leaves the potential for cards flying around the room. Begin by only using part of the deck and prove to yourself it’s not too many cards to hold in one hand. Once you’ve done it successfully with a portion of the deck, add more cards to the movement until you have the full 52.

Pro tip: do your best to grab a different number of cards off the top each time. Don’t only cut two cards each time or it will take forever, and don’t cut 15 cards at a time or the deck won’t get sufficiently shuffled. Try to alternate the number of cards you grab so the deck is properly shuffled.

Now that you’re all warmed up, it’s time for one of the more advanced techniques of card shuffling. It looks relatively simple on its surface but is much more difficult to perform than meets the eye.

Pro tip: This is not a race. The faster you try to go at first, the more room for error there is. Go slowly to begin. Get the hang of grabbing the proper amount of cards and setting the cards back onto the deck slightly off center.

By this point, you are used to squaring up the deck, but in this shuffling technique it doesn’t happen until the end of the shuffle. The trick is using that right index finger to snag the proper amount of cards as well as bringing the left hand around seamlessly.

And there you have it: six ways for an average card player to look like a pro when they shuffle cards. The key to the perfect shuffle is practice, so watch the videos and master one shuffle at a time. Once you have it down, impress your friends at your next card game.