The Most Famous Gamblers in History

The Most Famous Gamblers in History 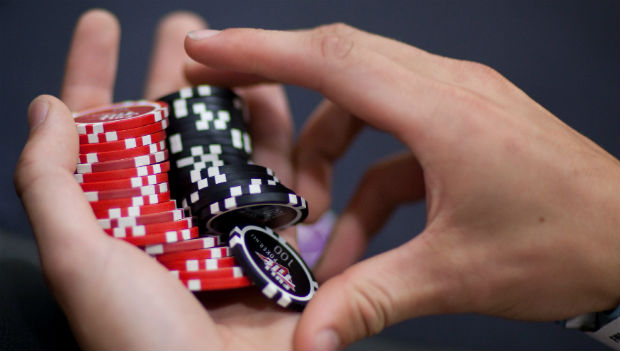 There are high rollers, and then there are these guys, ascending to a level that they’re considered among the most famous gamblers of all time. Each had their own way of achieving such a status – some have done it by being a successful gambler making hundreds of millions of dollars on the tables or at the tracks. Others have done it by being just as unsuccessful.

Among the notable famous gamblers in history:

An “honorable mention” goes out to bettors who were already famous – celebrity gamblers who love to put their money on the line at the tables and on the games.

Anyone who has studied poker and gambling history knows of “The Run.” Karas was the man on that run.

In 1992, Karas went to Las Vegas with $50 and a dream. He somehow managed to get a $10,000 loan and proceeded to turn that into $40 million in just two years, the longest and largest win streak in casino gambling history.

It took less than one year for him to lose it all. Karas claims to have bet more money in Vegas than anyone in history, a feat that can only, possibly, be challenged by fellow Greek Nick Dandolos (see below on the list).

A true gambler, he won more than $1 million at a pool hall when he got to Vegas, betting a whopping $40,000 per game. He won an additional $3 million in poker at Binion’s Horseshoe and only continued to raise the stakes. He crushed some of the poker legends 1-on-1 with hands worth close to $1 million, including Stu Ungar, Chip Reese, Puggy Pearson and Johnny Moss. At one point, he had won all of Binion's Casino’s $5,000 chips.

But then it got ugly. He lost $11 million playing dice and lost $17 million on baccarat. Down to his final $1 million, he doubled his money in poker only to lose it all on craps and baccarat days later.

Montagu was the 4th Earl of Sandwich and British politician in the late 1700s. He was also widely known as a lover of gambling. In office, Montagu is remembered for allowing rampant corruption and general incompetence (he had stints as Secretary of State and Postmaster General). But one piece of his legacy remains part of all our lives to this day.

That is because he is best known for creating the food known as the sandwich – which he devised because he didn’t want to get up from the gaming table. Instead of stepping away for a proper meal, Montagu would ask for slices of beef between two pieces of bread to be brought to him. His invention, intentional or not, makes him one of the famous gamblers in history.

Packer was a billionaire Australian and media tycoon and creator. He could afford to wager a few dollars, and boy did he. Parker is credited with the biggest gambling loss in British history – in 1999, he embarked on a three-week bender that cost him $28 million. He also lost $15 million on roulette in London in the 1990s. He’s also credited with winning $33 million at the MGM Grand in Las Vegas.

Packer was known for his temper and for not backing down. In one famous moment, a rich Texan at the Stratosphere in Vegas boasted he was worth $60 million. Packer took out a coin, and asked the Texan, “heads or tails.”

The Australian Ranogajec has built one of the largest betting syndicates in the world and is worth an estimated $600 million, making him one of the richest gamblers in the world. It’s been widely speculated that Ranogajec’s bets account for one-third of all bets on Betfair’s Australian site, no small feat.

He’s perhaps most known for being unknown. The elusive Ranogajec was based in Sydney, utilizing an “extensive network of spotters, analysts, bettors and administrators” called The Punters Club. He’s gone by different aliases over the years, reportedly using “John Wilson” for many of his gambling and investing interests. He doesn’t give interviews.

Ranogajec built a fortune on blackjack to become one of the more famous professional gamblers, turning a few hundred dollars into millions before being banned at most Australian casinos (and a few in the U.S. as well). He turned his attention and resources to horse racing, finding small margins and betting heavily on them. His funds reportedly accounted for 6-8% of the $10 billion annual revenue of Aussie bookmaker TabCorp, negotiating rebates from the book that has been controversial in the industry.

These days, Ranogajec (born in 1957) reportedly spends much of his time in the U.K. and on Isle of Man as a consultant in the horse racing industry.

Nobody in history has made more on betting than Benter, the Physics expert who was among the first to use mathematics to gain a gambling advantage.

Benter became a successful card counter before getting kicked out of every casino on the Vegas strip. He then moved to Hong Kong in 1984 and, along with partner Alan Woods, developed a formula for horse racing. In the first year of using his algorithm, Benter lost $120,000. His second year, he won $600,000. The next year it won $3 million. He continued to tweak and improve. Now, Benter has earned close to $1 billion and is considered the richest gambler ever.

Benter, born in 1957, has since moved back to his hometown of Pittsburgh and is a noted philanthropist and Chairman and CEO of Acusis, a medical transcription company.

“Nick the Greek” was a pro gambler and high roller, an inspiration for the World Series of Poker and once escorted Albert Einstein on a trip to Vegas.

Dandolos lived in Montreal when he made more than $500,000 on horse racing, but lost it all on card games in Chicago. Still, he built a name for himself and became a casino attraction. In 1949, he and poker legend Johnny Moss played a one-on-one poker game that lasted six months, set up by Benny Binion. It’s been credited as being the inspiration for the WSOP. Dandolos was down millions when he famously declared, “Mr. Moss, I have to let you go.”

In the famous book “Eight Men Out,” author Eliot Asinof attributes a quote by Dandolos, “Never bet on anything that can talk.” Dandolos died on Christmas Day in 1966 at age 83. He was an inaugural inductee into the Poker Hall of Fame in 1979. It is estimated he won and lost more than $500 million.

In the 1980s, Molony was a teller at a Canadian bank before rising to a role in savings, foreign exchange and loan accounting. But while he was earning a modest salary, he was embezzling millions to feed a gambling addiction.

How big of an addiction? Big enough to make this list. Molony sent more than $10 million in bank funds to a secret account in California owned by the Las Vegas casino Desert Palace. Between February 1981 and April 1982, Molony lost nearly $5 million at Caesars. He was arrested on April 27, 1982, after losing $1 million at the tables at Caesars. The casino admitted it never looked into Molony’s credit as he was losing all his money, but did supply him with tens of thousands of dollars in hotel rooms and a private jet to fly back and forth from Atlantic City and Las Vegas.

Molony served prison time, but rebounded nicely. He’s now married and works as a business consultant and has spoken about his gambling addiction. The non-fiction book “Stung” was written about Molony’s 18-month-long whirlwind, and the film “Owning Mahowny” was based off the book, starring Philip Seymour Hoffman. 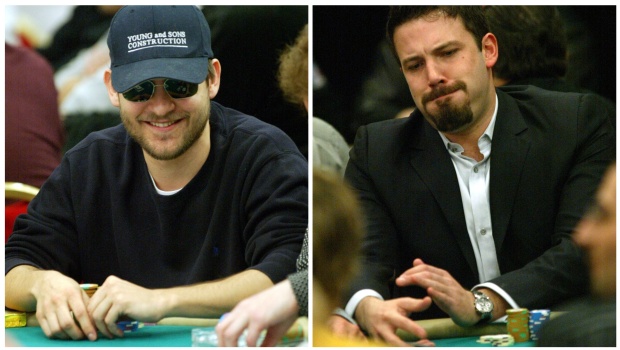 Maguire, best known on-screen as Spider-Man, is a high-stakes poker player, who was a key player in the book “Molly’s Game” that was turned into a major motion picture about the famous underground poker game.

Unlike many celebrities who try their hand at betting, Maguire is a successful gambler, reportedly raking in close to $10 million in poker.

The former Baywatch babe loves poker, even starting her own short-lived poker site in 2006. But she has had racked up significant debts. One night she lost $250,000, but wiped out the debt by making out with the winner.

The six-time NBA champion and arguably the most famous athlete in world history loved a good wager, especially on his own golf game and in poker. As Jordan noted in the documentary “The Last Dance,” he didn’t have a gambling problem, he “had a competition problem.”

He’d play high stakes card games with other NBA players including Scottie Pippen, Charles Barkley and Patrick Ewing, but he got into trouble in golf. In 1993 he lost $57,000 to suspected drug dealer and money launderer “Slim” Bouler, while Richard Esquinas was owed a huge $1.25 million from golf betting losses. Craps wasn’t his friend, either, reportedly once losing $5 million at a table.

Curtis Jackson, known in the rap game as 50 Cent, loves a good bet. He’s won some big ones. In the 2011 NFL postseason, Jackson won $500,000 on the Giants beating the 49ers to go to the Super Bowl, and doubled his money by wagering the winnings on the Giants shocking the undefeated New England Patriots in the Super Bowl.

The Grammy winner made a killing on boxing, betting $1.6 million on Floyd Mayweather to beat Manny Pacquiao and for him to beat Oscar De La Hoya in 2007. He also challenged Mayweather outside the ring, betting him $750,000 he couldn’t read a page from a Harry Potter book. Mayweather didn’t take him up on it.

Jackson also probably lost a few big ones. He filed for bankruptcy in 2015, alleging $32 million in debts. He’s bounced back with a successful film and TV career.

The Oscar-nominated actress doesn’t just dabble in poker, she’s one of the top female players in the world. She won a World Series of Poker bracelet in a Ladies’ No-Limit Game, the first celebrity to win a WSOP tournament. As of 2017 she’d earned nearly $1 million in poker.

Affleck loves the Vegas casinos, and the blackjack aficionado has even taken the time to learn to count cards. He reportedly has won $1 million at the Hard Rock Casino before being booted for card counting. In 2000, the Oscar-winning director won $140,000 in one blackjack sitting – which he reportedly gave away to casino staffers in chips – and later earned a whopping $800,000 playing three hands simultaneously.

The “Two and a Half Men” star is one of the most famous sports gamblers, and has been public about his betting, which included a $1 million win on Manny Pacquiao to beat Oscar De La Hoya. His betting ways also helped spur a divorce from actress Denise Richards – in the settlement, it was claimed he bet $200,000 weekly.

In 2012, Sheen declared himself a “retired gambler.” But in 2016 he was caught talking to members of an illegal sports betting ring run by the Mafia.